Dungeons & Dragons Online: Mists of Ravenloft expansion will immerse you in one of the most infamous D&D adventure settings. Save the people of Barovia, slay Strahd, and restore balance to the land. The stakes have never been higher! 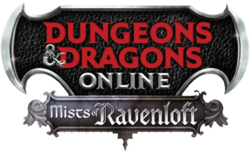 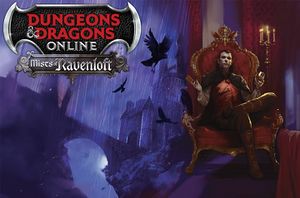 Mists of Ravenloft is DDO's third expansion, released December 6, 2017. It is available for purchase in the DDO Store or DDO Market[1]

When originally released, the adventure pack was offered in three different bundled options:

* This content was delivered at launch of Mists of Ravenloft (December 6th, 2017).

Other in-game items were available after the redemption of a Dungeons & Dragons Online ®: Mists of Ravenloft™ coupon code. For pre-purchasing customers, this was as early as October 17th 2017.

** This code is delivered separately from your expansion code. One per account.

The Mists of Ravenloft adventure pack consists of 12 quests (Level 10-12, Epic 31) plus 2 raids (Epic 32 only). The series begins with one stand-alone quest and three story arcs. The story arcs have to be played in the order listed below. The final quest in each of the story arcs requires that you complete the previous quests (in any order). You get a reward (random loot) for completing each story arc.

In the Shadow of the Castle

Bestowed by Ireena Kolyana in the Blood on the Vine Tavern.

Bestowed by Rudolph van Richten in the Blue Water Inn.

The Light of the Land

The Curse of Strahd bestowed by Rudolph van Richten in the Blood on the Vine Tavern. Old Baba's Hut bestowed by Adrian Martikov in the Blue Water Inn.