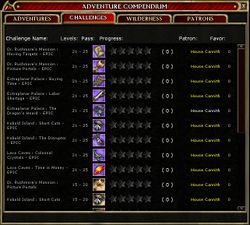 Adventure Compendium lists Challenges under its own tab.

Challenges are special timed quests that can be repeated many times over to gain collectible-like objects. These objects are then used to purchase and upgrade items from Challenge Traders, who can be found in the central courtyard of House Cannith, just north of the House Cannith Crafting Hall. Challenges are also unique in that you are always given a "score" which has no easy-to-hit fixed limit. Leader boards were later added to compete for the highest score in these Challenges.

See the lists of challenges here.

Vaults of the Artificers - introduced with Update 12

A word of warning, there is a recent change where Cannith challenge items have their minimum level reduced by 1; however if you upgrade any pre-update items they still retain the levels and abilities from before. Updates will respect the old update paths. Old-style items can be reset to the reduced ML items by deconstructing at a Cannith Crafting station.

A universal challenge token can be used to access any one challenge one time. Tokens can also be used in any challenge to purchase items from Supply Vaults.

Challenge tokens are not required for VIPs or players who purchase the pack to gain access to the Challenges. They have unrestricted access to any challenge at any time.

As of the latest patch to Update 14, the free daily token is Bind to Character. Tokens in circulation prior to the patch remain unbound and can be traded, auctioned etc.

You can get a single free bound token for each of your characters, once a day by talking to one of the token vendor NPCs:

Alternatively, you can purchase unbound tokens from the DDO Store, or more rarely, from the Auction House.

Some challenges drop orbs that provides you with temporary buffs. On Kobold Island, some crates fall off periodically with those buffs. On Dr. Rushmore's Mansion you can find it randomly by breaking stuff (or buy it from the Time Traveller Kobold). On Underdark Arena, the spectators throw out buffs on a timely manner. On every challenge, you can open a Challenge Vault with an Universal Challenge Token for it to open and give you some buffs.

All the buffs lasts for one minute, and can't be dispelled. They are color-coded, so you can identify which buff you will get by touching the orb. However, they are surrounded by a blue aura that makes this identification hard if you play with a far view.

Typically, scores are determined by numbers of kills, resources gathered (Dragonshards and such) and some other things; this will vary from challenge to challenge. Check each individual challenge for an exact list of what affects score. Star ranking never directly affects your score (though sometimes they are mutual goals). The Score is scaled 10% per level difference of the challenges CR versus the maximum level party member in the instance. E.G.: A level 20 group running a level 25 challenge gets a +50% bonus for each point they gain, so if a monster kill grants one point, they will instead get 1.5 points. Fractional scores will not be shown, but do count.

Your score determines how many reward items you will receive once the challenge is successfully completed.

You get 1 Favor point for each star, and 1 additional Favor point if you achieve all 5 stars and run the challenge at its maximum available CR, for a total of 6 Favor possible per challenge. (With 21 Cannith and 6 Eveningstar challenges, this is a total possible Favor of 162.)

Stars are awarded only if the main objective of challenge is completed successfully, and are not awarded progressively. To get all 5 stars, you must complete all 5 objectives during a single instance.

Stars also reward a large amount of bonus XP, this bonus XP is much larger the first each star # is achieved. See the XP section for a detailed explanation on how this works.

Challenges reward a certain amount of base experience; this experience scales at a fixed rate per CR level.

Which objective you complete isn't what's important, but rather it's how many stars you achieve. Meaning you can complete the first - required - star objective, plus any other one run, and that run counts as 2 stars. In another run if you complete the main objective and a different star, that will count the same and not reward you further, as you already achieved the bonus experience for star one and star two.

Some further examples to clarify:

In addition to this huge first time bonus, repeated stars also reward experience, generally around 800-950 XP per star, regardless of which star. This varies based on the level and length of the challenge.

Some challenges don't have any chests to loot. Instead, Supply Crates are awarded for each boss kill (What qualifies as a boss varies from challenge to challenge). These go straight into your inventory and can then be double-clicked (either inside or outside the quest; it's generally better to wait until after completion) to generate level-appropriate (for the crate, not the player) random-gen loot. The supply crates have a minimum level to open, so it's possible, if you go into above-level quests, to get ones you can't open. You can get a range of crates from the same challenge.

Chests that do appear in challenges are subject to ransack.

Player levels and penalty on XP[edit]

Regular XP penalties apply to challenges. When the party's highest-level character is below or equal to the quest's level, there is no penalty. For every level above the quest, you incur a 10% penalty per level. (See Experience points.)

Player levels and penalty on rewards[edit]

Some ingredients are always awarded, even if XP gained is zero. At level, you get 100% normal score (and thus rewards) for any given challenge. You get less when you are above the quest's level, to a minimum of 10% for being 5 or more levels over. If you are on a 20, running a challenge that only goes up to level 15, you get identical score penalties (and thus rewards penalties as they are a direct percentage of your score) going in on level 15 or level 4.

Individual instances scale the number of enemies at an increasing pace with each player added. Hirelings can also affect this type of scaling, though to a much smaller degree. EG: One additional hireling may mean 1 more monster in generated, while 1 more player can mean 3 more are generated. Large parties of players will encounter more enemies than solo or small parties. This scaling is in addition to the standard Dungeon Scaling present in all challenges (even the epic ones). One of the devs admitted this indeed is excessive scaling, possibly changed in the future.

Level 21-25 version challenges are considered "Epic"; however this is in name only, as they do not actually set the dungeons to Epic Difficulty. E.g.: You will not encounter monsters with Epic Ward, as greatly increased trap damage, as greatly increased monster damage, or really anything resembling other epic quests. The main differences are the main objective sometimes has an increased requirement to win, and the enemies have significantly more hit points and deathblock.

As of U18, you can no longer enter Epic level challenges with a Heroic level character.DDO Vault

Comparison to the Crystal Cove[edit]

Challenges are the next step in the technology the Crystal Cove introduced to the game, which ended up being a very popular special quest with very nice rewards for those willing to spend time during the event.

Challenges are different in many ways from the Crystal Cove: