Mirror of Glamering copies the appearance of a piece of armor, docent, goggles, helmet, weapon, or shield, creating a cosmetic version of that item. Introduced in Update 23, Mirror of Glamering is available from the DDO Store for 245

, and also as a rare reward in Daily Dice. 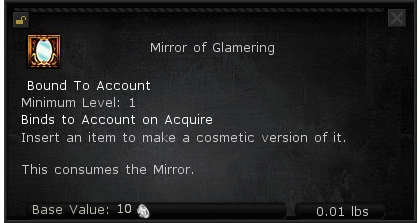 Double-click the mirror to start a barter interface. Drag an item to the ingredient list. Select the appropriate recipe. Click Create Cosmetic. You will not be able to glamer an item if you have a stack of mirrors or they are locked in your inventory.

Equip the cosmetic items in your cosmetic inventory slots to change your appearance. Cosmetic appearance can be toggled on and off.

Since Update 24, weapons can be glamered.