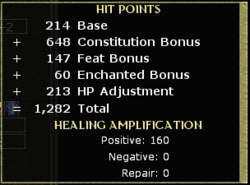 Healing Amplification on your character sheet

Healing Amplification increases the hit points cured by healing spells and effects. It stacks with various spellpower bonuses. It comes from race, class, items, and miscellaneous sources. To calculate your heal amp rating, add all sources of heal amp together. Items granting the same bonus type don't stack, only the highest value applies.

Update 24 introduced a new formula: Healing Amplification rating increases all healing by (100 + Rating) / 100. For Warforged and Bladeforged, the result is again multiplied by racial penalty, see below.

Most base races and transformed races start off with a Positive energy vulnerability (Healing) of 100% allowing all Divine healing spells to function normally on them. i.e. healing multiplier of 1.0.

Transforming from your original race to another will alter this multiplier.

Note: The description of healing amplification on many items is outdated. Check combat log and heal amp rating on character sheet.

Your healing amplification affects only Positive energy heals cast on you, whereas your Positive spell power (Devotion) affects only heals that you cast, regardless of target.