Hirelings are NPC adventurers that can aid you in quests, particularly when you can't find player characters online to help you, or when you want to have greater control in tasks within an adventure.

Vendors sell contracts for various levels and classes of hireling at key spots around Stormreach.

Hirelings are summoned by double-clicking the contract once you're in a dungeon or wilderness adventure area.

Hirelings can be summoned while underwater (entrance of Let Sleeping Dust Lie, for example).

There are three types of hirelings.

Hirelings vary in race and class. They aren't available in multiclassed versions. Artificer, Druid, and Monk hirelings are not currently available, and only one Ranger hireling exists), Lvl 24 Tarlov Snowtrack.

Contracts purchased from Hireling Vendors are Bound to Account and cannot be sold or traded to any other player. You can drop them in the account shared bank, if you have one. (This allows a character with a high Haggle skill to save money for your other characters, if you have access to that.)

Unless using a Hireling Contracts Folder (see below), contracts use 1 slot in inventory for each hireling contract.

Contracts vanish 60 minutes after first summoning. As of Update 8, the timers on hirelings pause when in a public area (where they cannot be summoned). It's possible to put a used contract with time remaining in the bank, allowing you to save it for when it's needed.

Nothing happens to the hireling if they're still active in a quest when the contract expires; the hireling keeps serving you until you dismiss them or you return to town. Contract expiration timers don't count down while you're logged out or in public areas, and a contract that's never been used lasts indefinitely.

You can summon a hireling any number of times while you still have a contract, though you must wait at least five minutes after dismissal to resummon (if you return to town and the hireling leaves, you can resummon immediately - for instance, if you reset the quest after going in on the wrong difficulty). Having multiple contracts for the same hireling does not change this; the only way around this is to have different contracts for similar hirelings (e.g. 2 different cleric hirelings, etc.).

You can dismiss a hireling by clicking the name in the party list, then right-clicking and choosing "Dismiss" from the drop-down menu. You need your hireling to be near you for this to work (however, you can always summon your hireling to you and then dismiss). You may dismiss your hireling at any time; however, even if you are a party leader, you cannot dismiss another player's hireling.

You can buy Hireling Contracts Folders in various sizes to hold different unused contracts, saving inventory space and giving you a wider choice of Hirelings to choose from. Hireling contract folders are available only from the DDO Store, and are Bound to Character once purchased (even though the contracts themselves are Bound to Account). Note that multiple contracts for the same hireling do not stack in inventory.

1. Stay/Follow switch. Controls whether your hireling follows you or stays in one spot. Press to switch between modes.

2. Call Hireling. Tells your hireling to come to you. Automatically switches the hireling to "Follow" mode as well. If they're too far away or there is terrain that they can't navigate between you, they'll teleport directly to you after a moment.

3. Aggressive Mode. Your hireling will freely engage enemies and use their abilities as they see fit.

4. Defensive Mode. Your hireling will freely use buffs and healing on both of you, but will only attack enemies that attack either of you first.

5. Passive Mode. Your hireling will take no actions whatsoever unless you explicitly command it.

6. Interact With Your Target. Your hireling's actions and this icon's appearance depend on your target. (Right-click things to target them, or cycle through possible targets with the Tab and Q keys.) 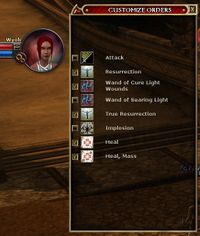 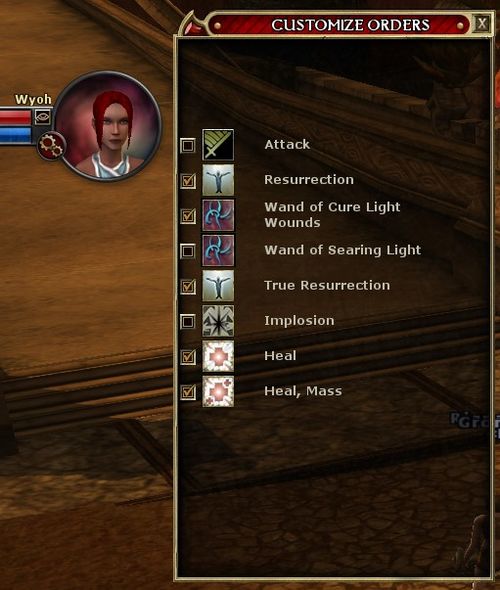 7-10. Hireling-specific actions. Manually orders your hireling to use one of their skills, spells, or abilities on your current target. The icons and abilities are different for every hireling.

As of Update 8, some hirelings will use standard common spells for that class, even if they aren't shown on the toolbar. A notable example: Cleric hirelings now remove curses, poison, and disease, often without prompting.

Since Update 23, you can right-click a hireling's icon to disable some of his/her activities, limiting their automated possible choices. This also show clearly all the Hirelings possible actions (aside from the basics of Follow/Stay, and Mode - see above).