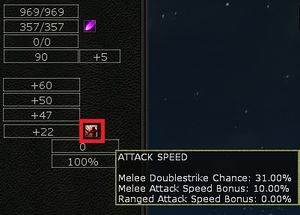 Attack speed is displayed on the character sheet

Attack speed is the rate at which your character attacks. The base attack speed is generally the same for all races and classes, except:

While standing still, depending on your fighting style, your attack animations have different duration (see attack sequence). It is possible to interrupt the attack animation by making a tiny step (twitching) or a special attack (for example, Cleave).

Your character in DDO can suffer from various effects that decrease your attack speed, for example:

Special attacks that use a unique animation and interrupt your normal attack routine are not affected by attack speed - most notably Cleave attacks work nicely. Changed around update 45 - the speed of a cleave animation now depend on attack speed.

Activating an Action Boost, wielding a different weapon, or casting a spell create a delay in your attack.

Autoattack vs holding the attack button vs clicking[edit]

(section might be obsolete due to Update 25 crossbow changes.)

Ranged weapons suffer from the issue where any speed bonuses (or penalties) only apply half their stated value due to the reload animation.

The developers are aware that this issue is present. If you cast the spell Haste it grants a 15% bonus to melee attack speed (although, most melee forms actually go a little bit faster than this due to animation quirks) and a 22% bonus to ranged attack speed. (MrCow)

For throwing weapons, any ranged attack speed bonus greater than 75% is considered excess, whereas 75% Thrown Attack Speed Bonus and above perform the throw animation 42 times in a 30 second window, regardless of Haste Boost, the Epic feat Blinding Speed, or any other outside effect increasing attack speed.

Supporting data: At a Thrown Ranged Attack Speed of 60% (where the only thrown attack speed boost coming from Whirling Wrists in Shiradi Champion Epic Destiny), 40 daggers are thrown in a 30 second window. Having the +15% Enhancement Bonus to Attack Speed (equipping one item with Speed +30%, which increases attack speed by 15%), you return to 42 daggers thrown in 30 seconds. Further exploration to find the exact breakpoint for the two additional daggers was not deemed necessary, given the available increases to attack speed given at rank 30.

Your basic attack speed depends on the animation of swings or shots and it varies for different weapons and combat styles.

Your base classes and epic levels affect your base attack bonus.