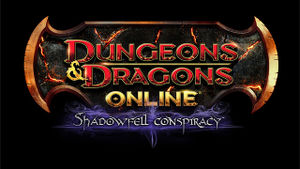 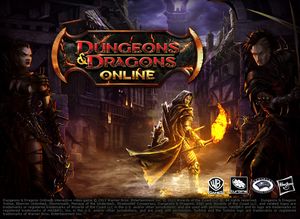 Shadowfell Conspiracy is DDO's second expansion, released August 19th 2013. It is available for purchase in the Steam Store or DDO Market [1]

An unnatural darkness looms over the prison city of Wheloon and shadows spread across the land. Uncover the sinister Shar plot that threatens to destroy Cormyr from within and face the full might of the Empire Of Netheril!

... a prison city full of irredeemable criminals and traitors to the Crown. In this place, Netherese agents conspire to forge an army out of the Kingdom’s enemies. You must masquerade as a traitor to infiltrate the Prison City, fight marauding criminal gangs, and destroy the army before it marches – all the while battling creatures made out of the very shadows.

... deep in the Storm Horn Mountains, the Netherese Empire prepares to unleash its secret weapon against the Kingdom of Cormyr. Brave treacherous mountain passes through griffon territory and overcome cunning harpy ambushes. At the peaks of the mighty Storm Horns, you must overcome an alliance of giants and monstrous creatures – only to have to contend with a terrible Netherese secret weapon.

(* "BTA" cosmetic items appear in a character's inventory only once, the first time that character is of that race, whether at initial character creation or reincarnation. This cosmetic is then BtC for that character, but are "race absolutely required" - they cannot be equipped for other races. The "BtA" refers to the fact that any and every character can get their own set if/when they first become that race.) source

Additionally, a bundle containing the following items is offered at checkout (with the purchase of a Shadowfell Conspiracy pack) for $39.99:

Similar to the offer available the previous year with MOTU pre-order, 11,000 DDO Points can be added at checkout for $59.99.

Menace of the Underdark Offer[edit]

The Menace of the Underdark "Standard Edition" pack can be added at checkout for $17.49.