The Land of Barovia 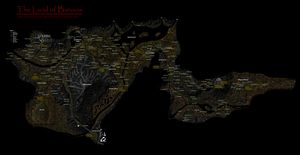 The Land of Barovia map 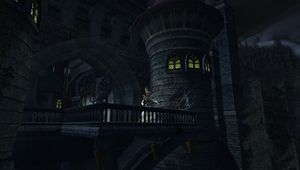 This adventure area is vast, and it includes villages, lakes and outer area of Castle Ravenloft itself

Wikipedia has an article on the same subject:
Barovia

In D&D lore, Barovia is a mountain valley within the fictional Balinok mountains. The terrain is densely wooded and the climate is one of frigid winters. The valley hosts a small village (also named Barovia), over which looms Castle Ravenloft, ancestral seat of vampire ruler Count Strahd von Zarovich. The location is loosely based on the real world Transylvania.

In DDO, The Land of Barovia is a Wilderness Adventure Area introduced with the Mists of Ravenloft expansion. Two variants exist, heroic (level 10) and legendary (level 30).

Alternatively, Bottle of Mist, exclusively available with Mists of Ravenloft ultimate bundle, allows to teleport to Barovia from any location:

There are three small public area hubs within Barovia. Each hub has a separate story arc with 3-4 quests.

Quest givers located in the wilderness:

These often appear at the same spawn points as 'rare' encounters, but do not give XP. Chests from these encounters will include Vistani Talismans/Totems and sometimes Sentient Filigrees.

Found this in the Land of Barovia (Epic) wilderness. South of van Richten's Tower across the water, there is a Vistani cart that has a stone sarcophagus falling out of the back. It has three crest sockets: bat, wolf and snake. The placement of the crests within the nearby wilderness is random. They can be at any one of the small tombs around the lake, a bit east and west and along the river, even inside the water. Placing the three crests in the sockets opens the sarcophagus and releases Carnival Exhibit. This event is not worth XP and does not count as a Rare encounter, since it is always there, but it does have a chest.

Note: Each journal can randomly spawn in one of three locations most often on top of a stone or brick.

I am the Ancient. I am the Land. My beginnings are lost in the darkness of the past. I was the warrior, I was good and just.

I thundered across the land like the wrath of a just god. But the war years and the killing years wore down my soul as the wind wears stone into sand.

All goodness slipped from my life. I found my youth and strength gone, and all I had left was death. My army settled in the valley of Barovia and took power over the people in the name of a just god, but with none of a god's grace and justice.

I called for my family, long unseated from their ancient thrones, and brought them here to settle in the castle Ravenloft. They came with a younger brother of mine, Sergei. He was handsome and youthful. I hated him for both.

From the families of the valley, one spirit shone above all others. A rare beauty, who was called "perfection," "joy," and "treasure." Her name was Tatyana, and I longed for her to be mine.

With words she called me "brother," but when I looked into her eyes they reflected another name--"death." It was the death of the aged that she saw in me. She loved her youth and enjoyed it. But I had squandered mine.

The death she saw in me turned her from me. And so I came to hate death - my death. My hate is very strong. I would not be called "death" so soon. I made a pact with death, a pact of blood. On the day of the wedding, I killed Sergei, my brother. My pact was sealed with his blood.

I found Tatyana weeping in the garden east of the chapel. She fled from me. She would not let me explain, and a great anger swelled in me. She had to understand the pact I made for her.

I pursued her. Finally, in despair, she flung herself from the walls of Ravenloft, and I watched everything I ever wanted fall from my grasp forever. It was a thousand feet through the mists. No trace of her was ever found. Not even I know her final fate.

Arrows from the castle guards pierced me to my soul. But I did not die. Nor did I live. I became undead, forever.

I have studied much since then. "Vampyr" is my new name. I still lust for life and youth, and I curse the living that took them from me. Even the sun is against me.

It is the sun and the light I fear the most, but little else can harm me now. Even a stake through the heart does not kill me, though it holds me from movement. But the sword, that cursed sword that Sergei brought! I must dispose of that awful tool! I fear and hate it as much as the sun.

I have often hunted for Tatyana. I have even felt her within my grasp, but she escapes. She taunts me! What will it take to bend her love to me?

I now reside far below Ravenloft. I live among the dead and sleep beneath the very stones of this hollow castle of despair. I shall seal shut the walls of the stairs that none may disturb me.

What's the first thing I remember? it must be Papa, calling out my name. "Ireena!" he'd shout whener I wandered too far away from his side. When I was little, I thought he was just being silly. Now I know what he felt. He was afraid.

It's not that my childhood was hard. The villagers tipped their caps to Papa and called him "Burgomaster". I lived in a fine house with a father and brother who loved me. Yet something was missing, something I can't describe or explain. As grateful as I am for my family and my home, sometimes at night I can't help but feel that none of it is mine.

I grew up here in the village, in shabby old Barovia. And ever since I can remember, its people have never seemed quite right to me. Papa burned bright with life, my brother Ismark too. But the others in the village: most of them just flickered, as if they were barely there.

Castle Ravenloft looks down on the village, watching us all. As a girl I always wondered who lived up in that splendid building on the hill. But when I asked the grownups about the castle, they told me to mind my business, or else I'd bring the curse of the demon Strahd down upon us.

I had so many questions, but I learned not to ask: not to ask why the doors were barred at night, not to ask why I couldn't go into the forest, not to ask what had happened to my friends who vanished without a trace. "Always stay close to your home, little one," they told me. "And fear the devil Strahd above all."

Sometimes at night I'd dream of a world of light, a world where the sun blazed like a bonfire instead of hiding behind the mists. In my dream, I'd walk through the warm sunlight to a little pond. Suddenly, I'd realize that someone was missing, someone who was supposed to be there. And then I would wake up to the cold and the dark.

One day, when I was grown, I went to the marketplace to buy some lamb for dinner. There I was, chatting away with the butcher when I suddenly realized that everyone else had gone silent. They were all staring at a tall man in expensive clothes who had just arrived in the square. And this man: he was staring at me. That was the first time I saw Count Strahd von Zarovich.

The night after I went to the marketplace, the Count himself appeared at our door. He called me "Tatyana" and said he'd come to see me. Papa and Ismark were terrified. I was not. This was the demon that kept the entire valley paralyzed with fear? He looked like just a man to me. But then Strahd looked at me. I saw the blazing hunger in his eyes: and then I remembered no more.

Later, they told me that Strahd bit me, like an animal. I have no memory of this, though the holes in my flesh showed it was true. I remember only darkness, and dreams where I ran and ran and then fell. When I awoke, they told me that I had been in a fit that lasted for three days. Papa said he thought that I would die.

Then he bit me a second time. Our neighbors tell me that Strahd came here. But I don't remember it, and neither does Papa or Ismark. I just remember waking up on the floor, with blood on my neck and the front door open. What can be done to defend against this kind of dark magic?

I vowed that Strahd would not have me, and Papa agreed. To keep the demon at bay, we barricaded ourselves inside our home. So Strahd sent his servants for us instead. Night after night the wolves came and beat against our door. Their howls kept us awake until we thought we would go mad from the lack of sleep.

Papa died on the seventh night. His heart couldn't take the strain, poor thing. Ismark and I thought that Strahd would surely attack in force. But no wolves came that night: and indeed, no wolves have come since. Maybe Strahd is giving us time to bury our dead, treating us like honored opponents on the battlefield. Or maybe he knows he has already won.

Now we wait. We wait for Strahd to come a third time, we wait for the darkness to take me at last. Ismark has given into despair since Papa's death. He says he does not believe Strahd can ever be stopped. I try to be more optimistic, but it becomes harder with each day. One thing I know for certain: if I am to resist Strahd, I cannot do it alone.

Last night I dreamed of the light again. This time a man stood in the sun by the pond, a man I had never seen before. He held up his hand, and in it was a sword that blazed with light. He told me that night was ending, and help would come with dawn. When I woke up it was still dark, and I could hear the wind howling outside. But this time I could feel a warmth within me. A light that refused to go out.