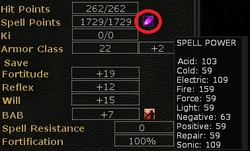 Spell power displayed on the character screen - hover over the icon

Spell power rating determines how much damage you deal with spells. In most cases, each point of spell power increase increases the base damage of your spell by 1%. Various effects can contribute to your spell power, all effects are added together.

Spell power affects Spells and SLAs, but does not affect magical damage effects on weapons from augments, filigrees, crafted enchantments etc. unless the description specifically indicates that it does

Spellpower only affects your own spells or SLAs, it does not affect spells that you cast from scrolls, wands, clickies, etc.

Some spells receive limited (usually half) benefit from spell power: