Wikipedia has an article on the same subject:
Sentient weapon

Sentient Weapons is a mechanic for epic/legendary content, introduced in Update 37 that allows players to upgrade weapons with sentience, gaining roleplay effects (weapons commenting your actions) and mechanical benefits (increases to various abilities). Sentience is gained by adding a Sentient Jewel to an eligible weapon then adding filigrees to gain the desired mechanical benefits.

The Sentient Weapon can make comments to the player as the weapon is held and used. There is a Gameplay tab option to turn off voice, text, or both.

Creating and Modifying a Sentient Weapon[edit]

To create a Sentient Weapon, you need:

(* So far, three items have been released which unintentionally accepted sentience: Bone Crusher, Copper Dwarven War Axe and Squid Smasher; while Bone Crusher was initially allowed to slide the last two were level 4 and thus so potentially game-breaking that a patch had to be introduced. As a result, slotting a sentient jewel into these items will make them minimum level 20.)

Once you have both items in your inventory, you can create a new sentient weapon:

Once you have a sentient weapon, you can add filigrees to it to grant it additional power

"Furious", the personality of one of the Sentient Jewels
(mouse-hover for pop-up) 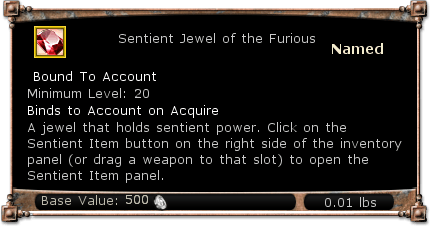 Each Sentient Jewel comes with its own personality. The name of a Sentient Jewel and its personality have no effect on game play, nor does it modify or limit slotted filigrees in any way DDO Forums . The jewel does change the in-game voice characterisation and vocal comments made by the weapon when equipped. Sentient jewel voice volume can be adjusted by opening Options ( Ctrl + o ) and going to the Audio tab.

All sXP is tied to the jewel itself, and not the weapon

Sentient Jewels have a cap for sXP

N.B. Adding a spark to a weapon won't immediately unlock the new slot unlocked - the sentient XP still needs to be obtained.

Sentient food and its value[edit]

The main source of sXP is to feed Named Items to the sentient weapon. Each named item will add a number of sXP to the jewel based on the minimum level required to use it. The actual numbers are as follows:

In addition to feeding named items to a Sentient Weapon:

Restrictions on feeding named items to a Sentient Weapon:

You can feed any named item that isn't specifically tagged as being worth 0 sXP. The list of ineligible items includes, but is not limited to, the following categories:

Costs (in exact sXP and approximate # of named items) to open Sentient Filigree slots are as follows:

You cannot destroy or unslot a jewel unless all filigrees have been removed from the weapon first.

You cannot slot or unslot Sentient Jewels or Filigree from within a quest.