A Saga is a group of quests or even story arcs that characters can complete for an additional end-reward. When running these quests, you will receive a number of “points” towards your reward based on what difficulty you run quests on. More points equal a greater end reward, and/or a wider variety of rewards to choose from.

The Saga giver has several dialogue options which explain both Sagas in general, and that particular Saga chain.

If you speak to the Saga giver, they will explain the "Rules of Sagas":

Both Heroic and Epic Sagas can be repeated.

As of Update 50, at least The Pirates of the Thunder Sea (Heroic) and Fables of the Feywild (Heroic) are enforcing timers, so the following information may no longer apply.

NOTE: The 100-hour timer for The Pirates of the Thunder Sea (Heroic) (3BC + Sentinels) is shown when asked for ("/quest timer") but can be ignored. The 3BC Heroic saga can be run daily with full rewards; not tested if it can be run more often than daily.

No other sagas have timers, and so can be repeated immediately.

NOTE: The timer for 3BC saga is shown when asked for ("/quest timer") but can be ignored. The 3BC saga can be run daily with full rewards(tested on heroic only); not tested if it can be run more often than daily.

Points are awarded for the quests you complete, and their difficulty level. Each separate quest is counted only once, at the highest difficulty you've completed it.

Depending on the number of points you have accumulated, you receive your reward. There are four reward levels: Normal, Hard, Elite, and True Elite.

The quest giver keeps track of the quests you've completed, and the quests you have not; this list can be seen by talking to them and selecting the "Give me a list of your quests" option.

When you turn in the Saga, the quest count is reset, setting all quest completions in that saga to "0". You cannot start to accumulate quests again until you select your reward from the last completion. 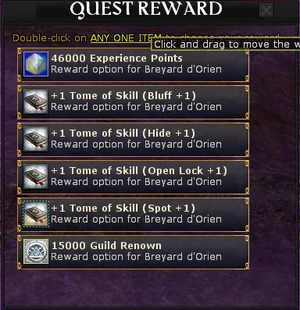 As your reward, you can select a single item from a randomly generated list - again, the higher the points total, the better your reward would be (and more tomes will be available to choose from).

The benefits earned are a single choice from...

1) Guild Renown Gem Rewards are the same for all Sagas, regardless of Level range (and see comments below):

2) The number of offered skill tomes depends on your reward tier; a single tome is offered for Normal completion, increasing to four tomes offered on True Elite. You can select only one Tome, no matter how many are offered, but this prevents you from being stuck with a +1 Tome of Listen.

Tip: A Guild Renown Elixir only needs to be active when collecting the reward. Complete multiple sagas over time, and drink an elixir just before collecting all the end rewards for maximum effect.

End rewards for some sagas occasionally include lesser standard renown bonuses, such as Heroic Deeds or Tales of Valor. These offer much less renown than the large "Guild Renown" gem option.