A Guild, within the context of Dungeons and Dragons: Online, is a group of players who may share common interests and objectives. More often than not, a Guild operates on one, designated server.

Note: This page is not intended for Guilds in Dungeons & Dragons Online to promote their guild. It is intended to hold information involving the new Guild System.

You can create a Guild by going to Social tab from your main menu and selecting the Guild tab. Enter in the name of the Guild you wish to create and then click on the Create button. If all goes well and if the name is not already taken you will then become the leader of your very own guild.

VIP players can create a Guild for free, but Premium and Free to Play accounts will need to purchase an Official Guild Charter from the DDO Store for 150 DP, to be able to create a Guild.

All official guild commands listed within the in game help file. All commands are usable by the leader of the guild.

* Bug: "createrank" and related commands have been disabled due to bugs. No plans at present to fix this.

There are three levels of seniority in a guild:

By default, the Leader is the character that initially created the guild, and has all lesser permissions, plus the ability to:

Officer has all Member permissions, plus the ability to:

Successor: This is only a flag, used to designate the successor to the Leader, in case the Leader resigns or becomes absent (see next). 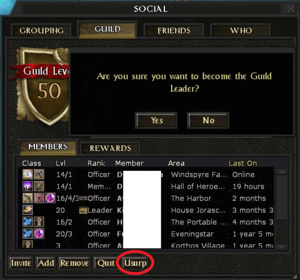 This seniority becomes important in the event that the Leader no longer wishes to be Leader, or is no longer actively filling that role.

If the Leader resigns or quits the Guild, the Successor becomes Leader. If no Successor has been designated, any Officer can become Leader - first come, first served.

Also, if the Leader has been inactive for 60 days...

If there is neither any (active) Leader, Officers or designated Successor (so only "Members" are active), then there is no way for a Member to become Leader*, and so no way to add new members, promote officers, buy/change amenities, or otherwise "run" the Guild, so the Guild is likely doomed. Any responsible Leader should make sure they designate an (active!) Successor and/or Officer(s), for the sake of all members in their Guild, just in case of the unexpected - life happens.

Joining a guild is based on that specific guild's requirements, which are decided by its Leader/Officers, the only ones who can do the actual recruiting. Some guilds actively recruit anyone and everyone they can find, while others require prospects to fill out an application (usually on a separate website) to join the guild, or anywhere in between. Whichever method is employed, there is a type of guild for everybody - small, large, social, raiding, casual, role-play light or heavy, permadeath - you name it, it's probably out there, looking for you. 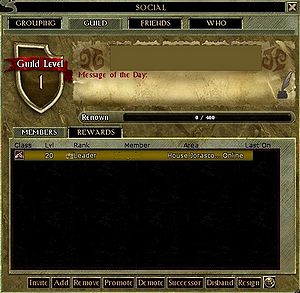 The Guild Tab in the Social Panel

To recruit a new member into a Guild, there are 4 basic options that any officer can use:

For any of theses, the character will then receive a pop-up invite which they can either accept or decline. The invite will also auto-cancel if ignored for 30 seconds. Note that if the name selected/typed does not match the spelling of any character currently logged in, the officer will receive the message: "You must specify a target to invite."

Detach the Sigil of Guild Recruitment, open up your inventory, and double-click it to join."

Also, anyone can advertise for guild members in a public area using the General /chat channel, or post information about your Guild on the DDO forums for the server your guild is on.

To leave your guild, simply open the Social Panel (by either pressing 'O' or Ctrl+'G') and select the GUILD tab at the top of the panel. Next, select "Quit" at the bottom of the panel. You will be prompted with a confirmation dialog asking if you would like to proceed, followed by an option to "Leave on good terms."

There are a maximum of 200 Guild Levels, a guild goes up in level by getting Guild "Renown" (see next). The higher the Renown level the more benefits a Guild has, which includes bigger airships, and a wider selection of amenities for your airship.

You can find a list of benefits unlocked as your Guild progresses on the Guild Level page.

Guild Renown is the experience point-type System for Guilds. The more guild renown your guild accumulates the higher in Guild Level it can achieve. Whenever an NPC is killed in a quest you are involved in there is a chance you will gain some renown from that kill whether or not you were the one that made the kill. Renown can also be gained from chest rewards and end quest rewards.

If your Guild gains too much Renown in a single day, then the percentage chance of any of the guild members gaining renown for the rest of that day decreases.

If members leave, some Renown will be lost, and possibly a temporary penalty applied to future Renown earned. 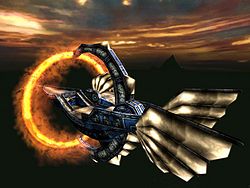 Guild Airships are the DDO version of Guild Housing, an extensive guide to gaining and populating them can be found at the Guild Airships page.

More information can be found at the Guild Crafting page.