The Battle for Eveningstar

The villages work feverishly to prepare for the Drow attack. Then night falls and there is nothing left to do but wait ..... 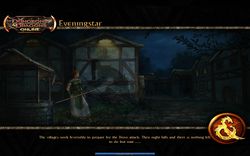 Swordcaptain Garwyn Thane has recruited you to help defend Eveningstar against an imminent Drow attack. Help defend the village against the coming onslaught.