The ship with the missing cargo sank just up the coast from Stormreach Harbor. An enchantment that surrounds you with a magic bubble of air will allow you to explore the ocean floor for Vaunt Arcanotechnic's shipment.

A ship carrying important cargo has sunk off the coast of Stormreach, and you've been hired to assist a Warforged salvage company recover the cargo and to deal with any threats that arise. Your group will dive down to find the wreckage and search for clues. 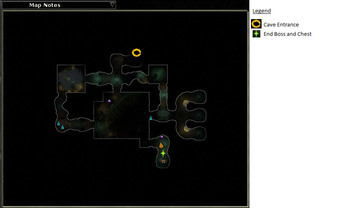 Map of the cave area.

On the ocean floor

Start in the NE corner of the outdoor (underwater) map. Deep Water and Aqua Sphere appear in your buff bar. Proceed SW to enter the caves. You can work on several optional objectives here:

Altar of the Devourer optional

The above was automatically compiled via DPL, 04:23:44 result from cache, age: 15:07:15 of max 1 day - if you think that's not up-to-date, refresh it by visiting this link (please, use sparingly, since it puts some additional load on the server)