Explore one of the most iconic locations in the D&D Eberron campaign setting in Dungeons & Dragons Online: Masterminds of Sharn. Navigate the power struggles between the rich and powerful as you hunt from the highest towers of the city to the deepest depths of the Cogs. The artifact that protected the city of Stormreach has been stolen. You've followed the trail of the culprit across the sea to the vast metropolis of Sharn. Can you recover the Stormreach Beacon without becoming a casualty of the conflicts between the Aurum, the City Council, and the Boromar Clan? 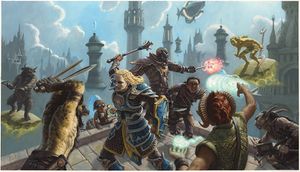 Masterminds of Sharn is the 4th expansion of DDO.

"Masterminds of Sharn" can be bought bundled with other features for cash money (3 different options available, as shown below) in the DDO Market. The Adventure Pack (adventures only, see below) and/or many of the "other features" can be bought, each separately, using DDO Points.

* This content will be delivered at launch of Masterminds of Sharn (scheduled April 30th, 2019) ** Sharn supplies and Dimensional Augment Bag are delivered immediately on the character and server where you redeem your expansion coupon code. Supplies and Bag are bound to account. Limit one Dimensional Augment Bag per account. Limit one set of Sharn Supplies per account.

(* One raid was included on launch of this pack, the second was delayed and added a bit later.)

Masterminds of Sharn: The Cogs[edit]

Masterminds of Sharn expansion content has been made available separately in the DDO Store, see below.

Some of the various elements offered in the different Masterminds of Sharn expansion bundles (listed above) are purchasable individually for points in the DDO Store: