The Lords of Dust

The Lords of Dust are demons and demon worshippers who seek to free the fiendish Overlords who ruled Eberron long ago during the Age of Demons. 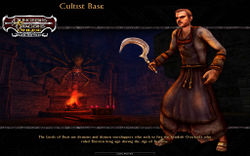 Cultists who follow the Lords of Dust have been found in Stormreach. The Church of the Silver Flame suspects they are behind the mysterious crack in the Harbor wall, and is determined to stop them.

Enter the Cultist Base in the Harbor, and meet with Inquisitor Gnomon. He will determine how to deal with the demon worshippers.

This is the first quest of the story arc Menace of the Underdark: Web of Chaos.

Notes: Tip: Ransack requires smashing every single breakable in the quest. There are 45 breakables in the first half of the quest. If you are trying to achieve Ransack, make sure you have smashed 45 upon reaching the first shrine.