Servants of the Overlord

Long ago the Demon Overlords were imprisoned inside the vast underworld of Khyber. Since then these unimaginably powerful fiends have been held by the power of the Silver Flame. 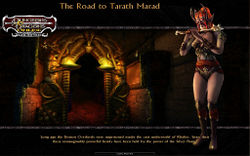 The Lords of Dust blew a huge hole in the Harbor wall, exposing a long-hidden entrance to Khyber. A horde of Rakshasas and Drow have entered the breach.

You must follow them and take the Road to Tarath Marad. Once inside, search for Brother Aurelius, a member of the Silver Flame who can help in defeating the Lords of Dust.