Many farmhouses have been ransacked by the Drow - there have been no survivors. 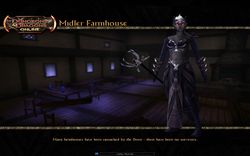 The Drow have captured a farm house on the outskirts of the King's Forest and are holding its inhabitants hostage. Go to the Midler Farmstead and see what can be done. The Farmstead lies just west of Eveningstar in the King's Forest.