The Banshee airship is transporting a powerful artifact to Stormreach, and it's your job to make sure it gets there. Defend the Banshee, and board and destroy enemy pirate airships. 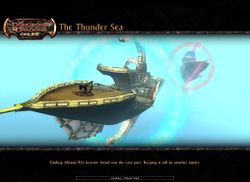 According to the treasure map, Ahraatz-Ri's treasure hoard is near Cutlass Falls in Three Barrel Cove. Now to go get it.

Fighting on the Eclipse of Blood