Within the great stone walls of Gianthold Tor lies the Stormreaver and his 3 renegade dragons.

Flagging quest for The Reaver's Fate raid. To gain access, finish the three quests The Prison of the Planes, Madstone Crater, and A Cabal for One (in any order) and then talk to Crag in the Gianthold city zone.

Nine of each Ancient Relics (Dragon, Elven and Giant) were needed to gain access to Gianthold Tor and The Reaver's Fate until Update 17 when the requirement was removed.

With Update 17 several pre-update 17 heroic objectives in this quest have been removed and /or replaced to be identical to epic version.

Be sure to prepare well before entering the circle at the entry, the opening battle is a long one.

Keep an eye out for the "secret passages" hidden in the walls (shown as portals on the map on this page, but not shown in-game). They lead to an early shrine and past sealed doors to continue the quest.

The main portion of the quest ends once you've slain the Portal Keeper, Caraduhn, and characters can finish at that point if they wish. Make sure you wait for his comments before you break each shrine, because he occasionally won't become hostile if you break shrines immediately without waiting for him to respond. The dragons and giant champions are optional and purple-named. They are much tougher than the main part of the quest; you might find yourself unprepared if you attempt to challenge the dragons on Hard/Elite.

In order to defeat the dragon and the giant, you must kill both of them

at the same time 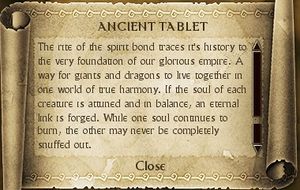 (within about 8 seconds) or the dead one will revive with full life and all the debuffs will disappear.

As of U17, the gatehouse levers do not need to be pulled simultaneously.

The above was automatically compiled via DPL, 04:14:27 result from cache, age: 23:10:35 of max 1 day - if you think that's not up-to-date, refresh it by visiting this link (please, use sparingly, since it puts some additional load on the server)