The ruthless Drow necromancers of House Szind transform the dead into new armies. To them a graveyard is a source of raw materials, not a sacred site. 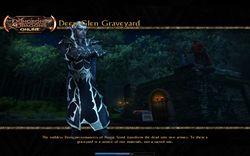 Drow necromancers have infiltrated a nearby cemetery and are using as a base for making their vile creations. Go to the Deep Glen Graveyard in the King's Forest and destroy the necromancers.

Death Ward is critical in this quest, as the Incanters and other necromancers will level drain or zap you dead even on Normal difficulty.

There are a variety of drow: warriors, archers, and necromancers. Kill the necromancers first because they can raise the others. If there are two or more necromancers, get one down to about 5%, move to the next, and repeat. Then circle back around and knock them off as quick as possible. This way you can minimize the amount of time that they can be raised by another, living, necromancer. Fear not if you miss one or two or all of them, for once they're raised and destroyed, they cannot be raised again.

Be warned; The incanter is also a necromancer, and can also be raised by the other necromancers. However, killing the undead version does not count towards the total you need to kill.

There are several areas of respawning drow, including standard necromancers. The standard necromancers can still raise the red named incanters, creating a red named undead. If you cannot kill them as fast as they respawn, then you may be overwhelmed. Try pulling back to an area (such as the town area near the shrine where you met the first incanter) that has no respawns to deal with the mobs. The red incanters have a limited range, and will snap back to their main locations if you take them too far.

After the graveyard fight, you can move deeper into the graveyard and leap the fence to get to the only shrine there for recharging for the final fight. Killing the final incanter completes the quest, so slay all others if you're going for Conquest before ending the last incanter.

The quest's title might be a reference to the very last sentence from the novel "Wuthering Heights".