The House of Death Undone 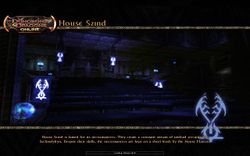 House Szind is rumored to have created a dangerous new form of undead. Enter the Drow house in the city of Sschindylryn in the Underdark, and destroy everything connect to these undead. An illusion spell placed by the War Wizards will disguise you the moment you enter Szind. The Underdark can be accessed through Eveningstar Cavern. Sschindylryn can be entered far south of the entry portal and high above the cavern floor.