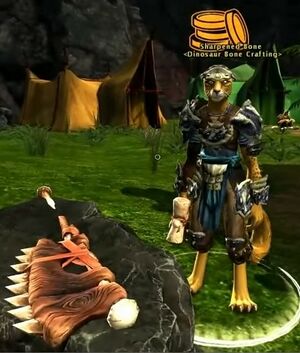 Dinosaur Bone crafting is a Legendary (ML31) crafting system introduced in Update 55: The Isle of Dread.

This crafting system features a total of 6 crafting ingredients, all of which are unbound:

There are 5 Isle of Dread augment types, each requiring ingredients from different locations:

These augment types can come in multiple variants: Armor, Weapon, and Accessory. For example, a "Scale (Weapon)" augment cannot go in a "Scale Slot (Armor)" slot, only a "Scale Slot (Weapon)" slot. All of the Isle of Dread augments and augment slots are clearly labeled in their descriptions to prevent confusion.

Dinosaur Bone armors, shields, and accessories are available as loot in the raid.

There are two types of weapon blanks:

Minor Artifacts are available from Isle of Dread quests and wilderness encounters.

Some blanks also drop in the saga end reward.

The enchantments scale with item level. Minor Artifacts (and raid blanks?) may yield higher-value bonus than described. The Compendium has a list of required ingredients linked to each augment here: https://ddocompendium.com/w/Dinosaur_Bone_Crafting

These augments drop from the Skeletons in the Closet raid if you complete the Free Yarrow optional ending.

Isle of Dread augment slots can be unslotted or overwritten: