A Cabal for One

While exploring Gianthold, you encountered a group of hobgoblins that were guarding the entrance to this underground lair. Explore the lair and find out what exactly they were protecting.

Trap and Lock DCs
Search & Spot DCs
One of the chests once had a super trapsmith's challenge and was the toughest non-epic trap in DDO (though is no longer true and the trap DC is now close to average DC for the quest level). It's behind a secret door.

Walkthrough (thanks in large part to DDO Forums)

Good buffs to have:

Clear out around the corner and speak to the traitor hobgoblin. He will give you two options. One, assist him in taking the place of leader amongst the tribe. Doing so, he will go through and clear out almost all of the traps in the compound, though he will double-cross you in the end. As of update 17, this route will no longer give you his extra chest at the end of the quest. Two, call him out and kick his butt right then and there. If you do this you will have to disable the traps along the way (bonus XP if you have a rogue) and (as of update 17) you will get the extra chest at the end. 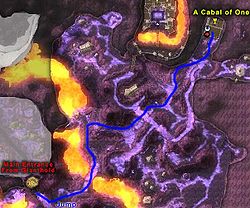 Make a choice and head further in. You will reach a low wall with a gate, with a passage that goes around. You can jump over the wall to open the gate, but either way you will need to go through the side passage to defeat a required enemy. In this side room is the ultimate trapsmith's challenge. There is a (locked) chest behind a secret door that is trapped with the super spike trap of doom (you'll see it when you open the door). If/when the chest is opened, a second, un-disarmable set of spikes start just outside the door - non-trappers should stand well back. There is nothing special about the loot inside, no matter all the work it takes to get it, so bypass it if you don’t have an awesome rogue and a super evasion save.

Clear out the hall and take the right side at the fork to clear out the shrine. (If you skip the shrine because you don't need it yet, the end door won't open and you'll have to go back to the shrine and kill everything inside. This isn't terrible as it allows you to shrine just before the final fight.) Then head back to the left. There is a small room to the left (west) you will need to deal with. Then head further in. The gates ahead are blocked, so you will need to go to the northern doors, climb the ladders and clear out both top rooms. That will open the gates, allowing you access to the final hall and throne room.

Defeat the king (he can be tough due to being able to heal very quickly, especially on elite. Burst DPS is important here), and Gardak the Traitor (if you chose that option) and get your chest(s). The king's chest will have 1 Ancient Elven Relic.

Don't forget to click on "headstone" at end of quest to get completion.