As the Rift Between Worlds grows, more and more of Eberron bleeds into the Demonweb. Only life blood given in self-sacrifice can stabilize the Rift and halt the cruel magic of the Spider Queen. 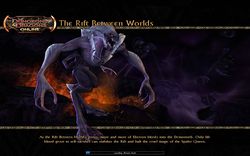 The Rift Between Worlds in the Demonweb is gradually consuming Eberron. The wizard Valana has devised a way for you to stabilize that Rift - though it will come at the cost of your own life energy.

Go to the Edge of the Rift inside the Demonweb. Once there, stabilize the Rift Between Worlds and retrieve the arcane Orb guarded by Khaszlokhar.

The path to the end fight in this quest is not as smooth as it is in the others, but it's simpler. There are some jumps down; trust that if you see ground below you, you're going in the correct direction (which is basically "north").

There are three gates that you must pass in order to reach the final platform. Each gate will drop only when all of the nearby enemies that spawn are killed. This can be quite annoying when drow or driders spawn up on some perch, out of melee range, and refuse to come down and "fight fair". Bring some form of ranged weapon/attack.

Once you arrive at the final platform and move towards the rift near the shrines, the fights/waves/tests begin. After each wave, the barrier behind the shrine is lowered for you to use the rift. It only drops for a few seconds and it takes away 50 Hit points from you. If you miss the time frame, you have to redo the same fight/test you just did. When soloing, I recommend fighting as close to the barrier as possible. When grouping, designate the person with the most HP or how you are going to alternate, etc. before the waves start so you don't miss your opportunity and the optional.

It can be helpful (though more time-consuming) to fight at the top of the web-bridge leading to the final area and range a couple of mobs at a time to your location. When you're down to one or two left, have a volunteer go to the barrier, and run back (or simply leap off the edge) as soon as the test is complete before the next wave spawns (alternatively, have somebody simply stationed at the barrier doing nothing but stabilize it). Be warned that on higher difficulties, Planewalker Drow will spawn *behind you* on this platform.

The hit points are lost for 15 minutes, and get refreshed with each new stack. If soloing, this is not fast enough. However, you can rest at the shrine to clear your stack and restore back to full hit points.

Bug: Enemies can rarely fall off the final platform, especially enemies that jump like driders and draegloths. When this happens, they seem to be teleported to one of the two above mentioned points. Since the test will be stalled until you kill that enemy, jump off and check the two points if you don't see any more enemies but the test does not complete.

Notes: Conquest is guaranteed here on elite (with 113 kills), as this is a kill all the monsters to complete type quest. Normal only has 36 kills (good for Aggression) unless you farm one of the waves (worth more XP than the optional).