Spies in the House

The Blood Tide uses this underground passage to spy on House Deneith. 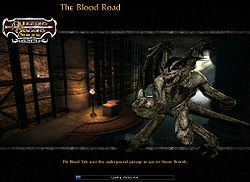 The Blood Tide has discovered a way to infiltrate into House Deneith and are using it to spy on Stormreach's sentinels.

Brysen d'Deneith wants you to enter the Blood Road, find out where it leads, and destroy the Blood Tide forces you find inside.

Trap DCs NOT SHOWN IN MAP Many of the traps can be avoided or timed, with care

Note: This is a complicated dungeon with many overlapping paths, with many secrets and multiple solutions to problems. It is common to hate this dungeon until you understand it, and then enjoy running it.