The Blood Tide's ruthless attack on the Black Loch struck fear into the local inhabitants. 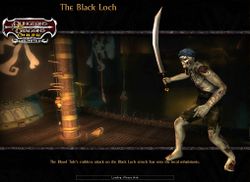 Tyn d'Deneith is sending you to the Black Loch to deal with the problem, but she warns you that there is something unnatural about the Blood Tide invaders.

Notes: Aggression may only be possible on Epic