Mystra, the Goddess of Magic, vanished years ago, causing the Spellplague. Since then her temples have been left empty and abandoned. 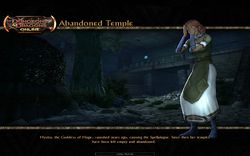 One of the villagers, Ana Brabener, has been captured by the Drow. Go to the old Temple of Mystra inside the King's Forest and try to save her. Take the left fork out of Eveningstar, travel past a mill building with a rest shrine, and then go east through the swamp.

A series of Spell Wards near the stairs make the direct approach more difficult. Swing counter-clockwise to avoid the first few, before going up the stairs.

Notes: The numbers required for the traps bonus will change as you continue.