The Spinner of Shadows

Deep within Khyber, near Tarath Marad, lies the prison of the Demon Overlord known as the Spinner of Shadows. For ages she has waited for just one moment of freedom so that she may once again spin her web of treachery. 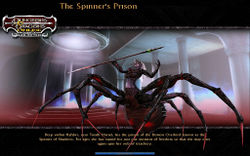 Go to the Spinner's Prison and prevent the Spinner of Shadows from returning to Eberron. If this Overlord is let loose upon the world, the consequences will be catastrophic.

This is the third quest of the story arc Menace of the Underdark: Web of Chaos.

The battle is divided in 5 phases controlled by the spinner's health. At elite difficulty you will get additional Hezrou spawns when red spiders appear and till the end of the quest. The rumor about those not appearing if you don't light the wards is false. They won't appear on Hard and Normal though. This guide assumes you have additional spawns and provides a way to deal with them.