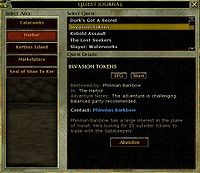 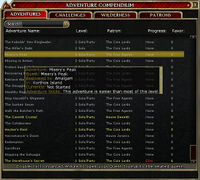 Adventure Compendium UI, added later to the game with Module 2.0

Quests are tasks that will be listed on your "Quest Journal" (- Default: L -). Most of them involve completion of one or more "adventure instances" (dungeons).

A list of quests and their completion status can also be found in the Adventure Compendium (- Default: P -).

Each quests is given by talking to a particular NPC or automatically bestowed when a player accesses certain zone. A player who has done this can “Share” the quest with party members, rather than having each player get the quest.

An NPC with a gold goblet above their head has a quest. When the goblet is grayed out, the quest is not available yet. When the goblet is red, the adventure pack with that quest must be purchased (each party member must pay). A blue goblet means that the quest has been completed and the reward taken. After completing the tasks that make up the quest, you can return to the NPC for "quest advancement" or for a final reward.

Fighting is done in adventure instances, in wilderness adventure areas, and in player-vs-player tavern pits. Adventure instances give loot, experience points (XP), and favor, whereas wilderness areas do not have favor, and taverns have no loot, XP or favor. Except for the beginning ones, quests have a minimum character level requirement (see quest minimum level). Quests may be repeated indefinitely; however favor is only awarded for the highest difficulty completed, and XP will start to drop if the quest is repeated without waiting a few days. (See experience points for further details.)

Turbine's terminology is quite vague here but "quests" (that go into your Journal) and "adventures" (that are listed on your "Adventure Compendium") are technically two different things, but here on DDOwiki we call them "quests" altogether, and our quest pages are created actually per "adventure".

Each quest has a base level by which it is commonly listed. In addition, most quests can be played at one of five difficulty settings: Casual, Normal, Hard, Elite, or Reaper. The effective level of the quest for most purposes is derived from the base level based on the difficulty.

Many quests have two base levels - one for Heroic difficulty and one for either Epic or Legendary. The quest Devil Assault is the one exception to the values listed on the table, as its heroic level progression goes 5, 6, 12, 18.

Just like in PnP, quests in DDO have a dungeon master (DM). The DM acts as a narrator, commenting your actions and leading you towards quest completion. In general, DM's instructions are secondary, your quest objectives displayed in the quest box should be enough to guide you to the end. However, sometimes, if you're stuck, listening to DM (or reading it) can provide the missing clue needed to reach your next objective.

The best loot and XP is earned when the player is within a couple of levels of the minimum quest requirement. When a player is much higher level than a quest, fewer, or no, XP will be awarded. Other factors that increase quest XP are: completing mission goals, fighting optional monsters, deactivating traps, and smashing breakables. Other factors that decrease quest XP are: failing mission goals, having party members die, reentering a quest before it is finished, repeating the same quest difficulty many times, and entering a quest long after other party members have started. (See experience points for further details.)

The quest difficulty is set by the first character in a party to enter the quest. If no party member has done a quest, only Casual and Normal settings are available. Once Normal is completed, Hard becomes available. Once Hard is completed, Elite is available. A player who wishes to skip Normal and Hard will look for a party where someone can “open on Elite”. One of the benefits of being a VIP (subscriber) is that you can enter a quest on Hard or Elite at-will (see Bravery Bonus). Casual is much easier than Normal and has reduced loot, but is useful for those wanting to solo/learn a quest. Epic difficulties are for characters level 20 and over, and a few quests are Solo only (and literally cannot be entered while you are in a party).

Short quests may take only a couple minutes, while very long quests may take a couple hours. The window to select a quest difficulty and start a quest shows the quest length and possibly a comment about the recommended party. A "balanced party" is one that has a good ability to: fight close-up and at range, find and disarm traps, and heal. Some quests require a party member to have high ability scores such as Strength, Intelligence, Wisdom or Charisma to complete. (see Specific quest requirements.)

Some quests are played in an order. Confusingly, this happens in quite different ways. In Korthos, for example, it is not possible to access quests in the wilderness area until others are finished. In Waterworks, it is possible to access quests out of the recommended order. In other quests such as the "Baudry Cartamon chain", it is not apparent at the beginning that it is a series of quests at all, and you can't skip a quest to jump to the next one. In some story arcs, such as The Sharn Syndicate, an NPC will send you to quests in a certain order, but you can complete them in any order you wish. And in other arcs (Ruins of Gianthold and Sands of Menechtarun, for example) there are groups of quests that must be completed (and player flagged) before the final quest can be started.