The Blood Tide pirates created the Bargain Bazaar as a place to sell their plundered loot. 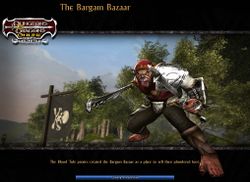 The Blood Tide has set up a makeshift marketplace called the Bargain Bazaar. Here the pirates sell the booty they have accumulated through their illicit activies (sic). The merchants of Stormreach want the Bargain Bazaar shut down.