The Maze of Madness

This labyrinth is inhabited by Forsworn minotaurs that have been driven mad from an overexposure to the madstone crater.

The minotaurs that surrounded this underground encampment were more aggressive than most minotaurs you've encountered. This could be attributed to the stories you've heard about the Madstone Crater. Explore this lair, but be careful, getting lost might not be the only thing that drives you mad.

Trap DCs (A lot of spike traps and blade traps) 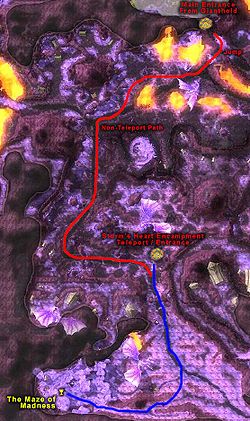 Work your way through the maze by pulling the correct door-opening lever and finding a couple of secret doors in the rock wall along the way. Anywhere there is more than one lever for a door, there is a trap. Disarm the trap to make it safe to pull all the levers to find the correct ones.

The quest is easy to work through, a small bit of logic will get you through the water gate, other than that it is pretty linear. When you get to the overpass be careful of traps. When you get to the path over the room of the caster, kill him but don’t drop down. Save that trap for last and you can finish out from there.

Head further in, the end room is just down the ramp and ahead. Finish it up, grab your loot, backtrack and drop down to the chest you skipped.

The end chest will have up to 3 Ancient Giant Relic.

The Maze of Madness loot

The above was automatically compiled via DPL, 04:21:32 result from cache, age: 22:57:06 of max 1 day - if you think that's not up-to-date, refresh it by visiting this link (please, use sparingly, since it puts some additional load on the server)