Some of the most untamed wilderness in Cormyr can be found on its northern edge, nestled against the cragged, nearly impassable mountain range known as the Storm Horns. 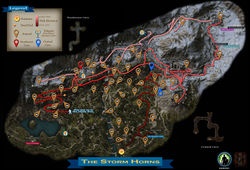 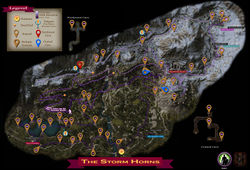 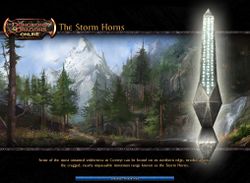 Unlike most explorer zones, the Storm Horns have some Bear traps around their zone. They are randomly located and can be disabled as any normal traps.

In addition to the Rare Encounter / Slayer / Explorer missions typical to all Wilderness Adventure Areas, the following missions can be found in this zone:

He transports you to a quest location of your choice from nearby the entrance, for 3 Astral Shard each. Additionally, he transports you to the following locations for free, if you already found them. Note - Be certain to unlock the camps by clicking/activating the Harper Camp Marker (a large standing stone with the Harper symbol on its side) at each of the three camp sites. Close by each Harper Camp Marker; they'll be a small one-person animal-hide A-frame shelter (tent), and small circular lit campfire, which might aid you in spotting the site.

NOTE: Three of these encounters appear to be missing, rendering this area's rare encounter list impossible to complete.

Wounded Soldier - Sometimes you will encounter a wounded soldier. You can talk to him, or just ignore him.

Move your mouse pointer over the animal's name for details.