This elusive organization of bards, mages and other adventurers are famed for their devotion to the arts, the preservation of history, and maintaining the balance of civilization and nature. Their often-secretive agents know one another by a silver harp pin. 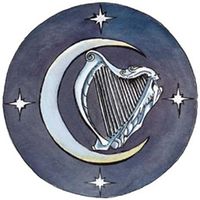 The Harpers are a faction and patron in Eveningstar.

Note: The Haunted Halls of Eveningstar grants favor only in the standard mode of the quest. The Extended and Commentary modes do not grant any favor.