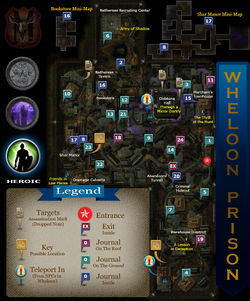 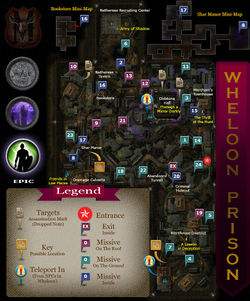 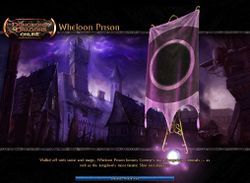 To access Wheloon Prison, go to the center of town, up the big ramp behind the NPCs and the crates. Enter through the portal at the top of the ramp. This area may require the purchase the Wheloon Content Pack.

Here you can find Snake, who can send you back to Wheloon Docks through some hidden tunnels.

A small hideout that have a few burglars inside. You can also find Journal #20 inside (both heroic and epic)

A vast mansion inside the prison. Some doors are locked. You can find one of the keys laying around in a random location in the prison, and the other two doors can be open by completing the Random Encounters Nothing Ventured, Nothing Gained (key given by Nil), and A Ray of Hope (door unlocked by Adara Semple). You can find Journals #17 inside the manor. Journal #8 is always locked: On Heroic, behind the random key west door. On Epic, behind the east locked door unlocked by Adara.

An old bookstore that still have some secrets. You will complete the random encounter The Magistrate's Menace there. Journal #16 is also laying around.

This tavern is usually filled with netherese army or telekinetic spell wards. You can also find Hunkajunk or Triste Blackwold here.

Inside the Oldstone Halls, you will find this barn. Inside, you might find a Shadow Puppeteer and his puppets, Nichts Volpe, Okage, Hush, The Black Eye, or The Dark Maw. Locked behind some bars is also the Journal #15

Unlike most explorer zones, Wheloon Prison has some Poison traps around their zone. They are randomly placed by trapsmiths throughout the area and can be disabled as any normal traps. Sometimes you might also find some Spell Wards.

In addition to the Rare Encounter / Slayer / Explorer missions typical to all Wilderness Adventure Areas, the missions for the Shadow Over Wheloon story arc can be found in this zone:

He transports you to a quest location of your choice from nearby the entrance, for 3 Astral Shard each.

Randomly you might find him in Wheloon. He sells a unique Glamered Clothing (Ragged Rags) for 20 Astral Shards, and you can buy Elixir of Angels Tears (2d6+14 universal healing), Potion of Alertness +20 (+20 competence bonus to Spot, Listen and Search for 20 minutes), Potion of Jumping +30, or Potion of Negative Level Removal (one single negative level) for 5 Astral Shards each.

Key to the Sharn Manor[edit]

A key appears in random locations lying on the ground (not limited to spawn points shown on the map, there are many more spawning points all over the area). This key unlocks the first floor west side door in Shar Manor. The only thing of value in the two rooms inside is Oraphaun's Missive #8 on Heroic.

Warning: on Epic difficulty, the rare encounters list is impossible to complete, as currently Zisskord cannot spawn (see his page for more)

Wheloon's rares list works a little differently than in most wilderness areas, as some of the rares that appear on Heroic are different to the ones that spawn on Epic.

Rares that spawn on both difficulties[edit]

Rares that only spawn on Heroic[edit]

Rares that only spawn on Epic[edit]

Each journal is worth  ♦495 XPNormal, with a  ♦2,970 XPNormal bonus for finding everything.