The Vault of Night

House Kundarak built the Vault to store secret treasures. But for whom...and for what purpose?

An unknown enemy has breached House Kundarak's defenses in the Vault of Night and taken complete control of it. Their own forces have had no success in taking it back, so they've asked for help from you and the Laughing Knives.

When you're ready, enter the Vault of Night in House Kundarak Enclave, and destroy whoever is responsible for this attack. 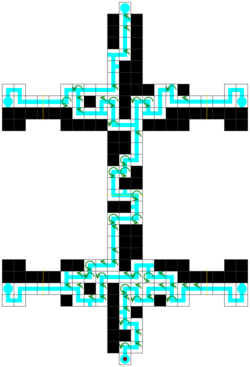 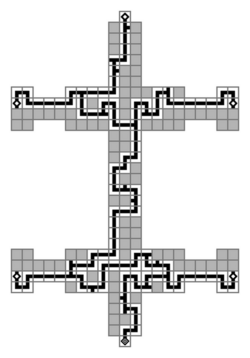 Vault of Night puzzle
Spoiler Warning: Information below this point can be considered spoiler material!

There are many nasty traps and locked doors in this quest, so a Rogue or Artificer is essential (except for exceptional parties). You will also need at least two persons with a strength of 25 for some levers and two persons with at least a wisdom of 20. Without these required stats, you will not be able to complete this raid. An Iron Defender can pull the levers.

With a sufficiently high jump skill (26 works, possibly lower) you can jump over the lightning fields in the north hallway.

Arcane casters should have Dimension Door and Knock as they will greatly speed things up. Casters (divine or arcane) should hand out acid and lightning resistance – preferably extended as this is a very long raid. Melee should have adamantine weapons for the end boss, as he has significant DR when running on epic, or even at-level on elite, as well as strong weapons for the foe you will inevitably face after this raid – the red dragon, Velah.

The party should do the north hallway first to ensure they can get past the traps, if the party cannot do so, there is no point in clearing the other hallways.

Pre-requisites: You can lead via voice and the party has the right stats.

Most importantly: When you begin, designate one person – preferably one who is very knowledgeable about the raid – to get the Voice and the Ring, and complete the main 4 objectives (Restore the power).

Other important objectives that can be done mostly simultaneously are the puzzle, coffer and crystal master key, so ideally also assigning players to each of these objectives for a fast completion (or groups of players if you're running high difficulties).

List of items NPCs will hand out (One time only, for one player only) – the important one here is the Voice:

Other key items required for quest completion – be absolutely sure about who picks these up:

Once complete, you gain entry to the final part of the Vault of Night raid quest series from an exit at the end of this quest. Do not recall from this quest on completion for you will not be able to proceed to the following quest.

Notes: Conquest requires you to kill the re-spawning Warforged in the puzzle area a few times to get over 240 monsters killed; generally one or two people are assigned this duty while the rest of the party continues.