Snowpeaks Festival is a winter event introduced in January 2021 (Update 48 Patch 3). Defeat new champion, collect coins, and turn them in for icy rewards.

While the event is active, a new type of Monster Champion, Scourge of the Snowpeaks, can appear in quests (subject to the same rules as regular champions (?), i.e., hard, elite, reaper difficulty). Kill the champion to spawn a white chest. Unlike with other types of monster champions, even regular (not orange) champions spawn a chest. The chest contains 1-X

All ingredients (coins, keys) are unbound. Frozen Key from the DDO Store is bound to account. 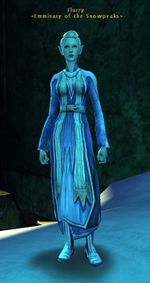 While the event is active, there's an NPC in the Halls of Heroes, named Flurry. Talk to Flurry to enter the challenge and turn in coins for rewards.

Available in the DDO Store: