Cold, thin winds swirl around you as you step into the core of the Vault of Night.

This quest gets you and your raid buddies transported to a pocket plane located high above Xen'drik. It consists of 5 islands interlinked by bridges. You have to solve a puzzle in order to gain access to the island which contains Velah, the Red Dragon.

This is a timed quest, you only have 45 minutes to complete it. The timer starts from the first person zoning into the quest, so if you need to discuss tactics, you should do this in The Vault of Night before entering this quest to save your time.

There are three pillars that all need to be destroyed at almost exactly the same time in order to open up the gate.

Range 1st and 3rd base with precise shot. Send a tank and a crowd-controller for 2nd base.

If you fall off the bridge on the way to or from the pillars there is a island at the center, underneath Velah platform, with a portal that will take a player back to the entrance of the quest if one is able to equipped a feather fall item fast enough and navigate to the small island.

The wall of force at the gate protecting Velah does not go back up for at least 3 minutes after fighting Velah begins (epic normal/hard), unverified for heroic or epic elite.

This is the only quest in the game which has fewer chests on Epic difficulty then heroic.

The above was automatically compiled via DPL, 04:22:25 result from cache, age: 20:00:38 of max 1 day - if you think that's not up-to-date, refresh it by visiting this link (please, use sparingly, since it puts some additional load on the server) 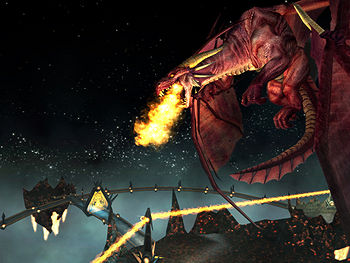