Characters facing the game's toughest challenges have encountered a wide variety of Monster Champions - creatures with increased skill and power. What is causing this increase in power? As characters investigate the source of this newfound strength they will begin to discover that many of these creatures carry Mysterious Remnants that seem to resonate with strange magical power. Could these remnants be causing these champions and their rise in power? What use could these remnants have for those looking for power? 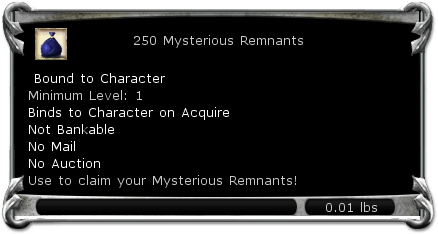 Occasionally, limited time rewards are available at the collector.

On Elite, Monster Champions typically drop 1-20 Mysterious Remnants with a rare chance of up to 80.

While DDO Bonus Days: "Double Mysterious Remnants" is active, the % chance for a drop is doubled. DDO Forums