This Grotto is damp, dark and forbidding. Strange odors mingle with the cold sea drafts, and whispered chants echo in the distance. 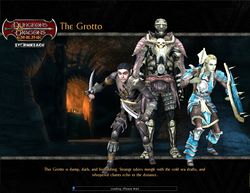 Notes: Only applies if your character disables the trap, not if Jeets does it.

Starter: Starter equipment cannot be traded, sold or crafted.
This item cannot be fed to sentient jewels. items are looted from a chest, or given if you choose to skip The Grotto.