Anniversary Card Collection was an event celebrating the eighth anniversary of DDO. The event launched with Update 21 on March 10, 2014. Players could collect cards, trade them, and combine them for special prizes. As of Update 24, Anniversary Cards and are now linked to their events, which means that the recipes created by combining various cards will only be available when the event is active. Anniversary Cards can no longer be used to make Anniversary Card recipes. 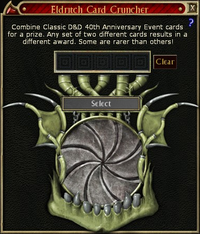 Once per day, per account, per server, you could roll the Magical d20 to earn a free card (two for VIPs) while the anniversary event was ongoing. All cards and items go into the Anniversary Bag.

All the cards are unbound, freely tradable. They are not auctionable as of Update 21.1.

You can combine two different cards for a reward. 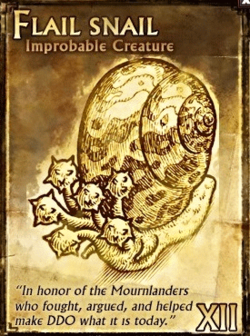 Double-click the Eldritch Card Cruncher to open a crafting user interface. Place two cards in and claim the rewards. The crafting UI is similar to Stone of Change or Altar of Epic Rituals, i.e., it does not show what you are going to get.