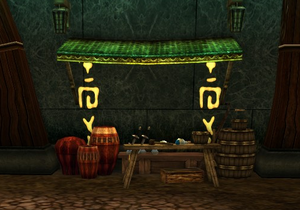 The Device Workstation in the House Cannith Enclave

Trapmaking is a feat Auto-granted to Rogues and Artificers once they reach Level 4. A build with 1 level of Rogue or Artificer can take this feat if they also take one of: Skill Focus Disable Device, Nimble Fingers, or least Dragonmark of Making feats. It gives the ability to scavenge trap parts from existing traps, which can be used as components in trap crafting.

Benefit: You have learned enough about traps to be able to scavenge parts from them, and with the help of the Free Agents, can craft your own.

At 4th level the Rogue and Artificer class are granted the Trapmaking feat automatically. The Trapfinding feat is also required to find any traps with a DC higher than 20 using the Search skill. The Trapmaking feat allows a Rogue and Artificer to harvest (scavenge) 'Trap Parts' from Trap Control panels belonging to traps that they successfully disable. Those gathered trap components can be used at the Free Agents Device Workstations to help craft traps, e.g. Mines. The Trapmaking feat also allows a Rogue or Artificer to place and arm/activate the crafted Trap (Mine Traps or mine-like Magical Traps) within quests. Once your rogue or artificer has the ability to collect trap parts, you should find your pack beginning to fill with an assortment of parts as you quest. Every box you disable has a chance of bestowing trap parts, and trap boxes are the only place to get parts. Your chance of parts, and how many you receive depend on four things:

However, it is always a random amount of parts. These factors just better your chances of getting a larger amount of parts. Sometimes a box will give you 1 part, another time it will give 15. Since you do have a random amount of parts, your best bet to obtaining many parts are to go to quests that have many trap boxes, especially many boxes of the same type of trap, such as Fire or Mechanical. It's important to note that if a single box controls multiple traps of different types, that box will only give one type of trap part.

There are 10 types of trap parts, each corresponding to their particular type of trap that the box controls:

In addition to Trap Parts, there are a few other trapmaking ingredients

All of the parts do stack by type, but I highly recommend heading over to the Twelve and claiming the free small ingredient bag as soon as possible. If you plan to do serious crafting on your rogue, then you'll want to invest in a small ingredient bag.

Crafting the traps is a very simple process, provided you have all the ingredients. First you have to find a Device Workstation, located in House Cannith or Eveningstar. If your guild is level 30 (24 Gold Seal), these crafting stations can be rented on the airship as an amenity.

The process of crafting is similar to the other crafting systems in the game. You open up the interface, place in the various materials, and press the craft button. The window will show the available recipes you can make with those ingredients and what the cost for building is. Be sure to select the right recipe from the list you wish to build.

With parts, you can make traps, specifically two types of traps. Mines and Grenades.

Grenades are very much like the various bombs that kobold throwers have, or like the Sun Flasks during the Festivult. They fly in an arch, and can be aimed to hit places a bow might miss. They can also simply be used while targeting, and they will usually hit the monster. Grenades are splash weapons, so it's best to use them when there are many monsters gathered close together and out of reach.

Mines function in a unique way. When used, you will enter in a short duration and a small device will be placed on the ground. Placing a mine will not disable your Sneak. After a second, the mine will set, indicated by a small light switching on. After that, any monster that steps on the mine will trigger the explosion. Mines deactivate and despawn after 150 seconds. They stack in groups of 100.

Since mines can be set up in the midst of combat, they are very useful when surrounded.

The weaker mines only have a blast radius similar to a fireball. The average and large mines however have an area of effect of twice that size. Deadly mines are even larger, with an area of effect that will hit an entire room.

If you plan to use mines regularly, it is important to make sure that DC is as high as feasibly possible. Since the DC is based on the total Disable Device skill, equipping an item to boost the skill is a good practice before setting up traps. Mine DC's are determined in the following way.

Magical Traps are a very unique type of trap. You can only use a select list of spells from 1st to 3rd level with magical traps, and all of them are focused towards crowd control. Examples include: Grease, Glitterdust, Hold Person, etc. These traps function similarly to mines, except that when they activate, the spell is cast. Since these spells are solely derived from the scrolls, the durations are very short in general.

All recipes follow the same basic pattern. In all traps, replace <Elemental> with your element of choice.

(Note: The UMD check is for characters without Rogue or Artificer levels.)

Magical (Both Poison and Spell Traps)

Some Examples of low level traps and their recipes[edit]