Throughout the Festivult event held in holiday season, every treasure chest in the game has a chance of dropping festival coins in addition to the usual treasure. Coins can be exchanged for seasonal items. Coins and rewards are unbound.

Since ancient times, the folk of Eberron have observed Long Shadows during these chill weeks of the month of Vult (December) -- a grim season when the power of the Shadow, god of the Dark Six, is at its strongest. Dire magic gathers in dusky corners, and evil stalks the night in a thousand guises. The Coin Lords have determined that the terror of Long Shadows must end! To this end, they devised the festival as a celebration to drive evil out of the city. Instead of cowering from the Shadow, citizens are encouraged to exchange gifts with their adventuring partners and loved ones. And by slaying the monsters who threaten the city's well-being, they may collect festival coins to demonstrate their dauntless spirit in the face of Long Shadows and the Dark Six!

The planes are vast and mysterious, and we can never predict how their alignment will impact the magically imbued gifts of Festivult. Each year the Festivult gifts are imbued with a different magical power depending on what planes are in alignment. So if you have some left-over goodies from Festivults past, beware, friends - those treats may not bring the same affects as before! 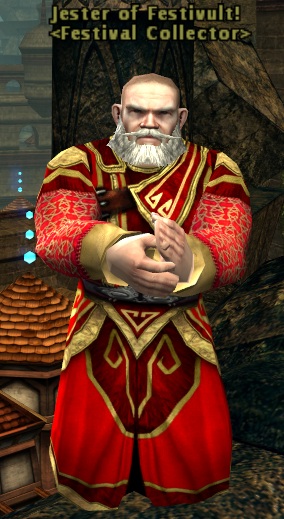 Notes: The Jester is a dwarven non-player character that appears during the Summer and Winter Festivult events. He accepts copper, silver, and gold festival coins to exchange for seasonal items!

The Jester resides at the top of a short jumping course made up of floating pillars. If you're not much of a platforming fan, go and visit him in the Harbor - the Leaky Dinghy have kindly provided a ladder.

The item effects are based on Planes of Eberron (Eberron wiki link), and their alignment will have impact on them.

Each year the Festivult Cookies and Cakes are imbued with a different effect depending on what planes are in alignment. Any left-over Cakes and Cookies, will have their effects retroactively changed.

Attention: some items are listed in the following table more than once. Furthermore, since the effects on some cookies have just changed, cookies in italics have not been updated with their 2022 changes, if any; until observed on a live server, they will be presumed to have their old 2021 effects.

Some of these items are BtA or BtC.

Small and large Cookie Jars can be bought from the DDO Store, and are specifically designed to hold cookies/cakes/etc from Festivult and other festivals. Cookie Jars are all Bound to Character!