From DDO wiki
(Redirected from Stone of Experience)
Jump to: navigation, search 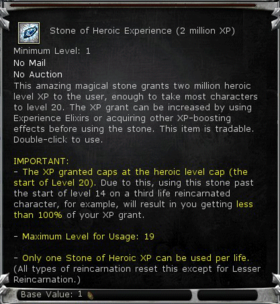 The Stone of Experience is a special item that gives a character about 2 million experience points.

The current Stones give about 2,000,000 heroic or epic base experience points, but is affected by XP boosts (XP boost weekends only affect the VIP bonus). However, the heroic version hard cap at level 20, while the epic versions can only be taken after level 20. Further, only one stone can be used per life. The current version of the stone has no more class restrictions on Druid levels.

This stone is included in the Heroic & Epic Otto's Box which can be bought in the DDO Store for a limited amount of time. In the past, those boxes reappeared in an interval of about 3 months with the latest being the sale in December 2017 slated to end January 1st, 2018.

While certain players may still have versions mentioned below, they are not attainable anymore in that form.

Players who purchased Menace of the Underdark and were level 16 or higher were eligible to receive Stones of Experience from a special NPC, Braddack Bouldershoulder, in the Harbor near the Marketplace entrance. This version of Stone of Experience could only be used once per account and game server. Promotion ended upon the release of Update 15. At that time, all Stones of Experience were supposed to vanish (but some didn't, most notably the stones in Account Bank and TR cache).

Players were granted stones based on their Menace of the Underdark purchase:

Stones of Experience temporarily returned to the game as part of a limited time DDO Store item package. One Stone was included in each box. Some problems involving their use were remedied by the Update 16 Patch 1 Hotfix.

The stones can be traded, however, only the person who opens the box can actually use the stone (on own character or a different one).

The Stones can be used on one's own character or shared with other players who meet the minimum requirements.