Secret of the Slavers' Stockade

Your search for the Slave Lords has led you to a fortress where the slavers organize their raiding parties. 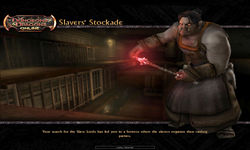 Use the portal in the Gatekeepers' Grove to travel to the Slavers' Stockade and search for a clue to the location of the Slave Lords.

Secret doors can avoid some combat

Except for XP there is no additional reward attached to this, so one does not have to go back to her after the objective is achieved.

Notes: Note that the counts reset after you enter the lower dungeon.

Secret of the Slavers' Stockade loot

The above was automatically compiled via DPL, 04:19:05 result from cache, age: 10:46:26 of max 1 day - if you think that's not up-to-date, refresh it by visiting this link (please, use sparingly, since it puts some additional load on the server)