It is a vast realm, where darkness pervades and danger lunks (sic) at every unseen corner. It is home to the Drow, amongst other things... 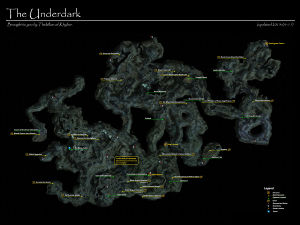 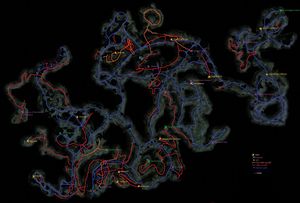 The Underdark map with pathing Spoilers! 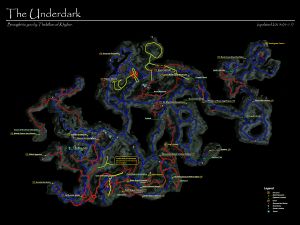 The Underdark is a level 22 wilderness adventure area, allowing characters from levels 20 to 26 to get full experience. It is located in the Forgotten Realms.

There are two ways to access this area. These are two different entrances, and get you to different starting points in the map.

* Take the smaller path that leads southwest from the Outpost. When the path ends, continue southwest to the portal.

The King's Forest entrance is very close to the Sschindylryn portal entrance. The easiest way to find the portal is to enter from the King's Forest, follow the path, staying left. When the path ends, approach the edge of the cliff on your right, and look below. You should see a drow bridge. Jump off the cliff with feather fall and cross the bridge, fighting up the path to the left, past spell wards, to the portal. (Taking the path right leads back to the King's Forest exit.)

Once the Sschindylryn central portal has been unlocked, you can enter the city from the Eveningstar cavern and then exit the Sschindylryn zone to the Underdark, in the south-center of the map, southwest from the King's Forest entrance. This is the default destination from Eveningstar Cavern.

There is another portal in the Underdark at the ruins of Riz Malag explorer option, west side of the game map (shown as a blue dot on Wiki map, above). Once this has been found (and the Sschindylryn portal unlocked, as above), it is available as an optional entrance point to the Underdark from the Eveningstar Cavern.

Similarly, one must travel to the northeast corner of the map to use the "Trader's Camp" as a destination from the Eveningstar Cavern portal.

Although the Underdark is true to its name (it's dark!), Malchor's Undersun Goggles amplify the Underdark radiation to give you better sight and reveal hidden enemies by making them glow red. These goggles will not help in most other low-light quests (such as Rainbow in the Dark), but will work in Don't Drink the Water.

It is provided free to players from a NPC Beli Bragason (Optics Merchant) upon reaching the Underdark. This NPC is located just east of Master Scout Atrezt Dun'Robar's spawn location, in an open area next to a large pillar. Once this has been unlocked (by traveling to it from a different entry), this can be easily accessed from the Eveningstar Cavern portal. Choose "the Trader's Camp", and, after entering, look to the southwest for the glow of a campfire.

True to its pen-and-paper namesake, getting disoriented in the Underdark is easy. Take advantage of the maps provided in this article. The Underdark is arguably the second largest wilderness area in terms of sheer height (The King's Forest is probably larger in area but The Storm Horns trumps in both categories), with many levels and few access points to reach explorer points and rare enemies. Dead-ends often have powerful and deadly rares. Feather fall is important here to reach some ledges. Monks and Favored Souls have advantage here with their long-jump abilities.

Most parties will be prepared to fight anything they encounter—and there is much that will find you there. A stealthy approach allows casual exploration without attracting attention.

Unlike most explorer zones, the Underdark have scattered around their zones some bear traps and spell wards. They can be disabled as any normal traps.

The Drow city of Sschindylryn is another adventure area, accessible from this zone. The four quests required to advance the raid flagging arc (the entire second quest chain series) are located in Sschindylryn, not in this area. So you must gain initial access here through the Underdark.

The easiest way to get to Sschindylryn via the Underdark is by going to the very southern part of The King's Forest and using the cave there. Once you enter the cave you may fight your way along the path and will discover the portal to Eveningstar/Sschindylryn. Then use that portal which takes you back to the Eveningstar Cavern and from that point on you may use the Eveningstar Cavern portal to get to the city, by way of a portal that rests on the southern outskirts of the city, and the quests within.

Should you use the portal located in the heart of the city to take you to other locations, any future uses of portals to get to the city will take you to that inner city portal and not the southern outskirts portal that leads to the city via the main bridge. Enemies that may normally patrol around this portal will not be present if you zone in before others in party enter into the city's main entrance, which triggers enemies to spawn.

Tips for the red dragon fight[edit]

The red dragon Micahrastir doesn't always spawn on the instance. In fact, when he is absent the "Dragon's Roost" doesn't look like a dragon's nest at all (no gold pile, no nothing). When he is there, two chests and gold pile appears. By backspacing these from below the nest, around the salamanders' area, you can check if he is there or not without running all the way up the "Grand Waterfall" side way. For this reason it is recommended to enter the Underdark area from eastern entrance (Merchant Camp), if you are going for the dragon fight.

The bridge to the nest gets destroyed shortly after starting the fight. So all the party members must be together on the platform in order to participate on the fight and get loot after. And yes, Micahrastir can wing-buffet you off the platform. Once you fall, there will be no way to reach the platform/chests again. It is recommended to rely solely on ranged/caster nuke and not to melee for this fight.

Note that active blocking will negate the wing buffet. If you have no choice but to melee, blocking continuously while taking shots immediately after each of Micahrastir's attacks may help. The wing buffet seems to be telegraphed by Micahrastir rearing up on his hind legs, which may give you time to block if you have a low-latency network connection and your character isn't stuck doing something else (like casting a spell) at the time.

If you do get wing-buffeted off the platform, it is actually possible to defeat Micahrastir with ranged weapons (it is too far for spells), if you return to the end of the broken bridge then jump down onto the dark, rounded pillar a few meters away from the edge.

During some encounters, you might fight some enslaved people. If you can find and kill all Slavemasters nearby, they will stop attacking, and you can remove their collar and free them.

Once freed, they will help you against any other enemy that is still nearby, but will not follow you.

Usually, the slaves are near the entrance from King's Forest, near the broken cart, and around the portal of Riz-Malag.