The ancient giants forced their drow slaves to build vast underground complexes. Their original purpose is lost to antiquity.

Gunnar Bauerson told you of a Sahuagin plan to awaken an ancient Devourer beast, a creature of terror and myth. You must enter the Underground Complex where the beast is imprisoned and then activate the giantish device that will keep it trapped in a frozen slumber.

The Underground Complex is located at the bottom of a cliff on Korthos Island, just outside Korthos Village. 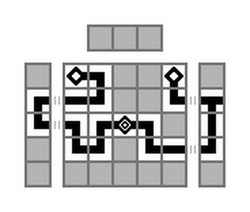 Stopping the Sahuagin puzzle
Spoiler Warning: Information below this point can be considered spoiler material!

Notes: A sahuagin just before the split and (a sahuagin in an alcove to the right of the beast, respawn every 3 minutes or so, allowing the conquest bonus, only 17 monsters, so you will have to wait for 11 respawns.