The Deep Water sahuagin use this underwater base to stage incursions into the Red Fens. 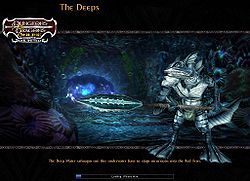 A group of rebel Sahuagin contact you, revealing that not all of their kind are hell bent on dominating the shores of Xen'drik and summoning demons. Help them restore the balance of power in their underwater kingdom by traveling to the underwater city and experience DDO's new (and much hyped) underwater combat system!

Notes: Getting onslaught can take a very long time. Getting conquest takes even longer and will require you to either clear the entire underwater section, or hunt respawns in the demon optional.