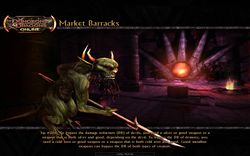 Lyvetenant Thifspar in the Marketplace needs help repelling the Devil assault on one of the Stormreach Guard barracks. If you're up for this task, then enter the Market Barracks.

Also, Beware of Turigulon's Pit Fiend's Super Natural Venom/Poison on EE/Reaper. On a save roll of 1 and failure, your constitution will drop to 0 and you will be stunned. You'll be quickly killed if solo.