From the Morgrave University archives -- "... the Chronoscope was build on a convergence line with the Outer Planes. It represents the height of Giant civilization, or at least a decent example of their borrowing from Argonnessen influences."

From the Morgrave University archives -- "Ancient fables speak of the Chronoscope teleporting Giant armies across Xen'drik during the Dreaming Dark war. But the Dragons of Argonnessen forbade any further use as a danger to the draconic Prophecy. It is unclear what threat such teleportation poses to the Prophecy." 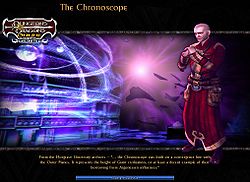 Nolan Gann has asked you to protect his daughter, Nelle Gann, on her quest to find her brother. You can reach Nelle Gann by taking an Airship to the Chronoscope Excavation from Falconer's Spire in the Marketplace. 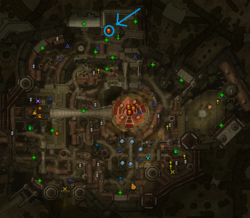 The above was automatically compiled via DPL, 11:16:14 result from cache, age: 07:54:38 of max 1 day - if you think that's not up-to-date, refresh it by visiting this link (please, use sparingly, since it puts some additional load on the server)